PREMIA, with the cooperation of NCCHE, initiated LC-SCRUM-AP by forming academic collaboration with sites in various countries in the Asia-Pacific region. By leveraging LC-SCRUM-Asia*1 led by NCCHE, PREMIA aims to establish genomic screening platform in the Asia-Pacific region and to develop precision medicines for patients with advanced or recurrent non-small cell lung cancer.

Background
Recent advances in genomic analytic technologies, such as next generation sequencing (NGS), have led to the development of precision medicine, in which effective, personalized cancer treatments are developed based on the results of a genomic analysis of each individual cancer patient. In lung cancer, many drugs targeting alterations in EGFR, ALK, ROS1, BRAF, NTRK, MET, RET, and KRAS have been approved in Japan so far, only some of which are approved or available in countries in Asia-Pacific. Going forward, precision medicine in lung cancer is expected to accelerate, with the active development of therapies targeting other genomic alterations such as HER2 and EGFR exon 20 insertion. However, the frequency of each of these genomic alterations is rare, accounting for only 1-3% of non-small cell lung cancers excluding genomic mutations in EGFR. As a result, the establishment of a large-scale, international genomic screening platform with the cooperation of Japan and other countries through academic collaboration, is critical.

With the launch of LC-SCRUM-AP, approximately 20 institutions in Thailand, Malaysia, Vietnam, Singapore, Indonesia, Australia and Taiwan, will participate through academic collaboration. In cooperation with NCCHE, PREMIA is mainly responsible for launching participating sites and for developing and establishing the genomic screening platform in the Asia-Pacific region. 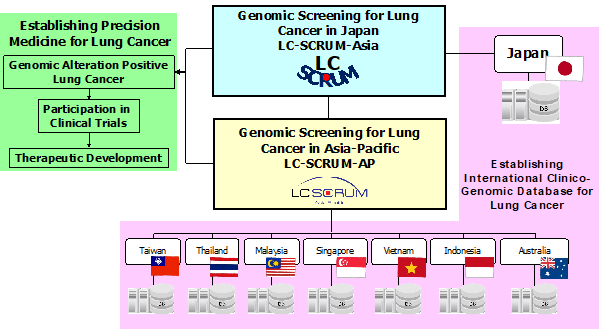 LC-SCRUM-Asia
LC-SCRUM-Japan, a genomic screening platform launched by the National Cancer Center in 2013, in collaboration with medical institutions and pharmaceutical companies (Representative: Koichi Goto, Chief of Department of Thoracic Oncology, NCCHE), expanded to include East Asia in 2019. Since then, it has been operating as “LC-SCRUM-Asia”, an international genomic screening project in which more than 17,000 lung cancer patients have participated as of September 2022, and during which time, large-scale genomic analysis has been conducted with the goal of developing new therapeutic and diagnostic agents for lung cancer. Going forward, academia and industry will continue to work together to promote the development of novel therapeutics and diagnostics for the optimal medical treatment of lung cancer.

About Precision Medicine Asia (PREMIA)
PREMIA offers an integrated platform for the development of innovative oncology therapies and diagnostics in Asia, the fastest growing market for the pharmaceutical industry. PREMIA also manages Japan’s nationwide clinical-genomic lung cancer registry, LC-SCRUM-Asia, the only such database in Asia. The registry currently includes more than 17,000 patients and allows an efficient patient identification process for clinical trial enrollment through participation by more than 200 hospitals in Japan and Taiwan, with the addition of hospitals in Southeast Asia through LC-SCRUM-AP from 2022 onwards. For more information, please visit www.premia-inc.com.

About National Cancer Center Hospital East (NCCHE)
The National Cancer Center Hospital East (NCCHE) was established in 1992. It is a leading specialized cancer hospital in Japan, treating over 9,000 new patients each year. NCCHE is designated by the national government as a core hospital for clinical research and a core hospital for cancer genomic treatment, among others. Together with its adjoining facility, the Exploratory Oncology Research & Clinical Trial Center (NCC-EPOC), NCC Hospital East has produced many achievements as a research and development center with its strong international network. NCCHE has been promoting the development of innovative cancer medicines and medical devices and cutting-edge personalized treatment, including genomic medicine.